It happened on April 26, 1986. I was almost 4 years old. I can barely remember seeing about it on TV and hearing something from my parents, everyone was very scared and uncertain of the future. Growing up in the Soviet Union you didn’t know much about the outside world, or to say for a fact even about the inside world we lived in, because where we lived was sometimes a world covered in dark secrets. It happened in Ukraine, a country once part of the big red block.

It was to be the biggest, deadliest and most costly natural disaster in the history of our planet. Us, humans, in constant search for bigger and better things, sometimes we miscalculate our abilities and at the end we get this, a disaster like no other, that threatened the world as we knew it.

Almost 30 years have passed since that dark day, but what is the legacy of Chernobyl Disaster these days?

I have watched numerous documentaries, seen movies made about it, heard of people telling tales about that eery place. Chernobyl will always haunt us, something that we should learn from, but unfortunately we make the same mistakes over and over again. Humans have yet to learn so much from this magnificent planet Earth we like to call our home.

My fascination with animals and nature and how they peacefully coexist with planet Earth got me interested in this documentary that I want to share with all of you. It is called “Radioactive Wolves” and in the dead zone of Chernobyl the live goes on. 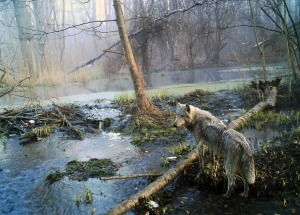 This documentary examines the state of wildlife populations in Chernobyl’s exclusion zone, an area that, to this day, remains too radioactive for human habitation. To my surprise in Chernobyl the wild live thrives, where for us it is a dead zone of lost city and lives. Is it simply because animals have no fear of radiation like us humans do? I truly believe that we are the biggest threat to the wildlife and nature on this planet and it is US they should fear and not the nuclear meltdown and the after math that followed.

Russian designers for this Fall 2013 showed us some really funky and innovative hat creations, during the fashion shows that took place in Moscow, in recent days.

I personally love hats, I wear them all year round. I find that hats complete an outfit. I just don’t know if I am daring enough to wear some of the creations from these Russian designers such as; Slava Zaitsev, Bunker Z, Marina Makaron and Alena Akhmadullina. What do you think, can you pull it off?

A Plus Size Life

more than a brand. it's a lifestyle.